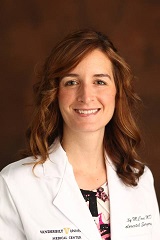 Molly Ford, M.D., is an Assistant Professor of Surgery in the Division of General Surgery, Colon and Rectal Surgery. She is also the Director of Vanderbilt's Hereditary Colon Cancer Registry.

Dr. Ford completed her general surgery residency at Oregon Health & Science University in Portland in 2012. She then completed her Fellowship in Colorectal Surgery at Ochsner Clinic in New Orleans in 2013. Dr. Ford joined the Vanderbilt faculty in 2013 as an Assistant Professor. Her clinical interests include all areas of colorectal surgery, but specifically colon and rectal cancer, fecal incontinence, colonoscopy, and benign anorectal disease.

During her training, Dr. Ford received numerous awards and accolades including the William Fletcher Surgical Research Award in 2010. She was awarded Outstanding Senior Surgical Resident in 2011 at Oregon Health & Science University in Portland. In 2012, she received the Donald Trunkey Award for Surgical Ethics and Professionalism.