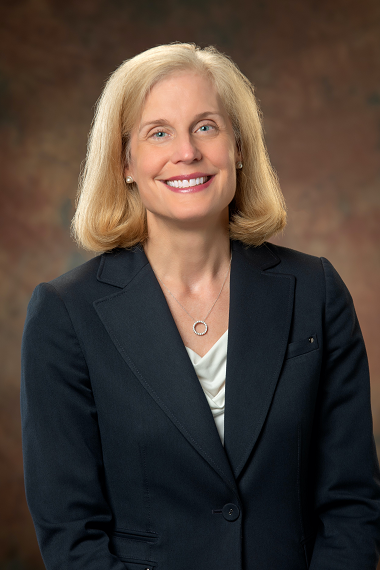 Jennifer A. Pietenpol, Ph.D., is the Director of the Vanderbilt-Ingram Cancer Center, the Benjamin F. Byrd, Jr. Professor of Molecular Oncology, and Professor of Biochemistry and Otolaryngology. Pietenpol’s research focuses on breast cancer and the p53 family signaling network—the most frequently targeted network for mutation in human tumors. Recently, Pietenpol has integrated her research expertise in tumor suppressor genes and molecular genetics with bioinformatic analysis of high dimensional genomic data sets to molecularly subtype difficult-to-treat, triple negative breast cancer. Her results are being translated to clinical trials and alignment of patients to appropriate, molecularly targeted therapy. Her research has impacted many areas of science and medicine and she has translated her discoveries into clinical impact for breast cancer patients. Pietenpol’s research is funded by the National Cancer Institute, the Susan G. Komen for the Cure Foundation, and the Department of Defense Breast Cancer Program.

In 2008, the President appointed Pietenpol to a six-year term on the National Cancer Advisory Board. Also, Dr. Pietenpol serves on the external advisory boards for eight NCI Comprehensive Cancer Centers and leads two as Chair. In 2011, Pietenpol was appointed as member of the Susan G. Komen for the Cure Foundation Scientific Advisory Committee and as a member of the Frederick National Laboratory for Cancer Research Advisory Committee. Recently, Dr. Pietenpol completed a three-year, elected term on the AACR Board of Directors. This year she will begin a three-year term as a Member of the Institute of Medicine, National Cancer Policy Forum.

In 1997, Pietenpol received the Burroughs Wellcome New Investigator Award in Toxicology; in 2004, she was honored with the Excellence in Teaching Award at Vanderbilt for her mentoring of graduate and medical students. She was inducted into the Johns Hopkins Society of Scholars (2009) and received the Carleton College Distinguished Alumni Achievement Award in 2011. In 2012, she was elected as a fellow of the American Association for the Advancement of Science for outstanding contributions to the field of cancer research, particularly the involvement of signaling networks in breast and other cancers.

After graduating from Carleton with honors in biology and as a member of Sigma Xi, Pietenpol earned a Ph.D. in cell biology at Vanderbilt University School of Medicine in 1990. She continued her postgraduate training at Johns Hopkins Oncology Center (now Sidney Kimmel Comprehensive Cancer Center) before returning to Vanderbilt in 1995 as an assistant professor of biochemistry. She achieved the rank of full professor in 2002. Pietenpol has served as associate editor or on the editorial board for numerous biomedical research journals. She has authored or co-authored over 120 articles published in the peer-reviewed scientific literature.

The research program in the laboratory focuses on epithelial cancers, with a focus on triple-negative breast cancer and the p53 family-signaling network. The Pietenpol Lab pioneered techniques for analysis of p53-chromatin binding and identification of p53 target genes. They discovered that p63 signaling confers key epithelial differentiation properties to cells by regulating novel target genes and transcriptional programs. The group deciphered the functional p73 binding sites in the genome, was the first to link the mTOR signaling pathway to regulation of p73 activity and define a role for mTOR-p73 signaling in epithelial and mesenchymal differentiation. More recently, the laboratory has integrated expertise in molecular genetics with bioinformatics to molecularly subclassify difficult-to-treat, triple negative breast cancer into subtypes. The subtypes include basal-like (BL1, BL2), mesenchymal (M) and luminal androgen receptor (LAR). This work has been validated, and cited over 2,500 times since 2011. These results are being translated to clinical trials and alignment of patients to appropriate, molecularly targeted therapy.
Also, the Pietenpol laboratory made the seminal discovery that p73 is required for multiciliogenesis and regulates the FoxJ1-associated gene network; thus providing a unifying mechanism for many inflammation-mediated phenotypes observed in p73-knockout mice. The defects in multi-ciliated cell differentiation and immune signaling in the p73-deficient mice provide an animal model for the study of several human inflammatory diseases. Most recently, my team demonstrated that p73 is essential for ovarian folliculogenesis.