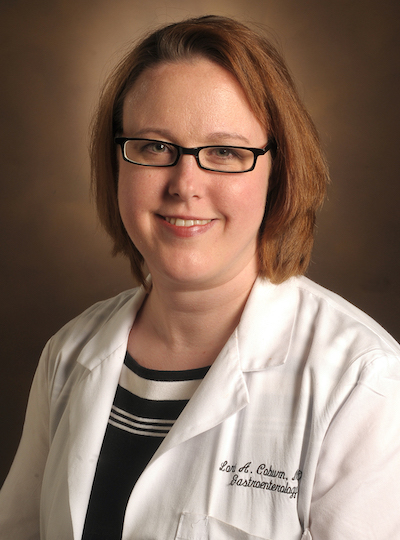 Dr. Coburn is an Assistant Professor of Medicine at Vanderbilt University School of Medicine. She is a physician-scientist in the area of Gastrointestinal (GI) Research utilizing patient derived samples, mouse models, and cell culture systems. She is also a Staff Physician at the VA Tennessee Valley Healthcare System in Nashville, where she performs endoscopy and attends on the inpatient GI Consult Service.

Dr. Coburn's research is focused on gastrointestinal mucosal inflammation and carcinogenesis, with a specific interest in the immune dysregulation associated with inflammatory bowel disease (IBD), which affects approximately 1.6 million Americans. IBD, consisting of ulcerative colitis (UC) and Crohn's disease, is characterized by chronic relapsing and remitting immune-mediated inflammation that leads to an increased risk for cancer. Based on a prospective study to collect serum and colon tissue samples from control subjects and UC patients, she has shown that CCL11 (also known as eotaxin-1), a chemoattractant for eosinophils, was one of only two targets out of 42 analytes assessed that was increased in the serum from UC patients versus control subjects, and the only one of these that was also increased in tissues from these patients at all levels of disease severity. She has also shown that CCL11 is increased in Crohn's disease patient serum. Despite CCL11 being classically described as an eosinophil chemoattractant, her laboratory has found that both epithelial cells and macrophages express the receptors for CCL11. They are working to further define the role of CCL11 in epithelial and macrophage signaling and function as part of her VA Merit Review Award.